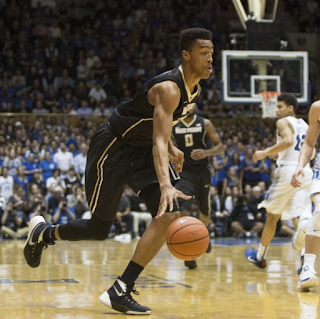 A big time athlete at 6-10, Collins can fly above the rim and has a ton of bounce in his game.

Pros
Has ideal physical tools for the PF position and is developing quickly. Has superb quickness, burst and leaping ability, allowing him to blow by defenders and rise up for impressive dunks. He is a constant threat on the backdoor alley-opp and does a good job of filling the lane on the fast break and putting himself in position to get to the rim.

Collins does most of his damage in the paint and is becoming a major force as a rebounder, on both ends of the floor. He does a nice job of following up on missed shots to get the easy put back.

He is very efficient with his touches and shoots a high percentage from the field, thanks in part to his great dunking ability. He shows some promise in the pick and roll game and does a nice job of rolling into the lane and getting himself open. His post game shows flashes of potential and he does a really nice job of fighting for post position. He’s developing a consistent baby hook shot and he uses the drop step well.

He has good defensive upside and uses his length and leaping ability to alter a lot of shots in the lane. Can defend at the rim and shows good mobility/versatility to guard on the perimeter.

An upside athlete who could take a few years to develop but has the potential to be really good.

Cons
Collins is still very raw and just figuring out how to tap into his potential. His offensive game is a work in progress and he does most of his scoring within 8 feet of the basket. Can his mid range game develop to a point where he’s a real threat from outside the lane?

Can play a bit out of control, over-driving the ball, leading to turnovers.

Needs to show better discipline on defense, staying vertical to avoid fouls and not falling for up fakes. Doesn’t always play with good positioning and can be slow to react on D.

Comparisons
Has some Darrell Arthur in his game but his ceiling is close to Marquese Chriss, although he doesn’t have the natural shooting ability that Chriss does.

Projection: late lottery to mid first round pick in the 2017 or 2018 NBA Draft