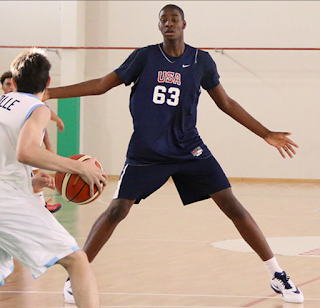 Overview
Jackson Jr. is a long, wiry and bouncy athlete who has really good size at 6-11 with a 7-4 wingspan and a nice skill level. He’s an exceptional shot blocker and a developing offensive talent. He has the skill level and ability of a top 5 selection but in such a strong class he could fall to mid lottery. One of the youngest prospects in this class.

Strengths
Jackson has all the tools you look for in a modern NBA 4/5. He is a superior athlete for his size and can really play above the rim. He goes after offensive rebounds hard and plays with good hustle and aggression. He shows really good timing on his put backs and running the baseline for lobs and he can finish through contact. His length is a major factor on the glass and he rebounds out of his area well.

Jackson can guard outside of the lane, showing quick feet and good anticipation, and he can guard at the rim with his length and good hops. His lateral agility for his size is impressive and he shows some small forward traits with his quick feet and perimeter play. He shows good awareness off the ball and is a good help defender and weak side shot blocker. His ability to protect the rim and guard outside gives him a lot of value.

While not being a true stretch 4 or 5, Jackson has shown the ability to hit from mid range and is expanding his range out to 3. He’s got a good release point, a consistent stroke and, although he shoots kind of a funky ball, he projects has a solid outside shooter.

He’s shown rapid development heading into college and now, getting to develop with Coach Izzo is a big plus. He’s young for his class and just scratching the surface of his potential.

Weaknesses
Has an unpolished offensive game. Lacks a go-to post move and is still figuring out the footwork that could make him an elite prospect.

Shoots a funky shot, kind of a knuckle-ball (but he’s knocking them down).

Lacks upper body strength (although he’ll surely fill out his frame at Michigan State and early in his NBA career).