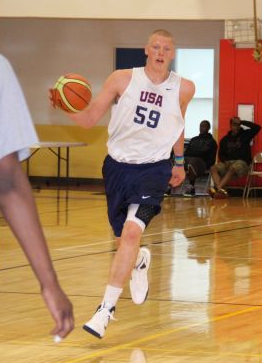 A talented big man with an ever-expanding offensive game and a lot of skill in the open court.

Can knock down outside shots with ease and consistency.  Is a good pick-and-pop player who should become a high level three point threat.

Can handle the ball with either hand and takes his man off the dribble well. A good passer with nice vision. Exceptional at pushing the ball off a rebound or delivering an outlet pass.

Has good overall length for his position.

Cons
Gives up post position too easily and is not a rim protector. Lacks lateral quickness and could be a liability on pick n’ roll D.

His lack of elevation limits his below the rim game and I could see him getting his shot blocked a lot at the next level.

He’s got a nice shot but didn’t shoot at a high clip from 3 during his Freshman year.

Comparisons
Reminds of Dirk but doesn’t have the same size and is not as pure a shooter.  A strange comparison… he reminds of a taller Draymond Green the way he gets out and runs the fast break.

Projection: He’s not in the top tier of talent in this class and doesn’t project as a franchise player at the next level but he should be a lottery pick in the 2016 NBA Draft