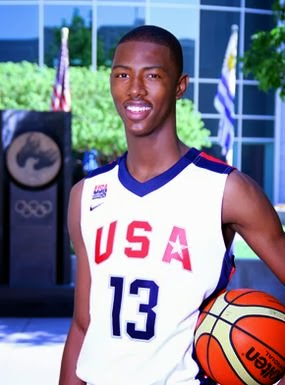 Giles is a super quick, high flying power forward with big time potential. He’s got length, strength and a ton of natural talent but is coming off multiple injuries, which is a red flag.

Pros
Giles is an exceptional athlete with an NBA body and NBA skill set. He has great quickness up and down the court and is a truly sensational athlete for a 6-10 player. He can get to the rim with a burst and overpower defenders, and he knows how to change speeds and use his strength and quickness.

He has impressive ball handling and passing ability for a young PF and he shows some point-forward skills, like a young Lamar Odom. Plays an aggressive downhill style and is always a threat to take it to the rim.

On defense he uses his bounce well to protect the rim and can hold his own in the paint. He has the speed to get back in transition and his overall quickness really stands out; quick hands, quick feet and really quick in the open court.

He does a good job of avoiding silly fouls and staying on the court.

Cons
He is a work in progress with his jump shot and is inconsistent from 18 feet and out. Will have to show improvements in his three point accuracy to become a true stretch 4 and all around threat at the next level.

Can be a little wild with the ball and needs to let the game slow down, without losing his intensity. Can over drive the ball and get caught up in the lane.

Lacks old school center size and doesn’t have the strength to bang inside against the biggest NBA centers.

His two knee injures have to be a cause for concern.  He has yet to show the same quickness and explosiveness that he showed before the injuries. Will he ever regain that elite athleticism?

If healthy he has a chance to be special.

Comparisons
Pre-injury he reminded of Chris Webber, the way he could overpower defenders in the lane and excel in the transition game.

After the knee injuries he seems to be slower and less explosive…kind of like Markieff Morris or a better version of Jason Thompson.