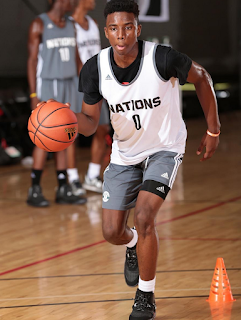 A supremely athletic shooting guard who can really explode off the floor and finish above the rim. He is still developing the other aspects of his game but has big time potential.

Strengths
Diallo is a high level athlete who is probably the best overall athlete in the 2017 Draft. He has great vertical leaping ability and great length, allowing him to play above the rim with ease.

He knows his strengths and does a good job of attacking the rim and overpowering opposing guards. He can throw down some highlight reel dunks and is always a threat to throw it down in transition. Does a good job of finishing throw contact.

He has the length and athleticism to be a great defender if he commits to locking it down on D.  If he can become a two way player his upside is sky high. Diallo has broad shoulders and a frame that should be able to add a lot of muscle, which will make him a more versatile defender and better able to compete for rebounds at the next level.

He has decent form on his jumper and should be able to become a consistent threat from downtown, with the right coaching and a lot of practice. He’s still raw as a shooter but the potential is definitely there. He uses his quick first step to gain separation and can elevate and get his shot off, even against tight defense. He has a natural feel for creating space and getting the defender off balance.

Has all the tools to be a legit star in the NBA.

Weaknesses
His shooting is a weak point and it remains to be seen whether or not he becomes a good three point shooter. His release on his shot is a bit low. Will have to work hard to make outside shooting a strength of his game.

Needs to avoid over-driving and getting caught in the lane. Still learning how to get teammates involved and developing his passing skills. Isn’t a natural passer.

Needs to work on his left hand and overall ball handling skills.

Comparisons
Has a lot of Vince Carter in his game, and some J.R. Smith. DeMar DeRozan.