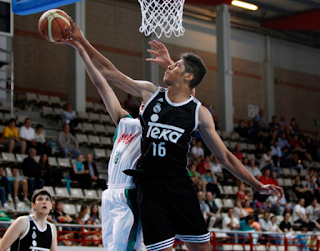 A raw but very intriguing center prospect from Brazil who has exceptional size at 7-2 and good body control.

Strengths
A massive center who has the frame to develop into a force in the paint. He’s not only long but has a large frame which will carry a lot of muscle. He appears to have similar size to Brook Lopez and he also has a soft touch around the basket. He gets low post position and holds his ground in the paint well. Plays with a wide base and a low center of gravity.

A solid rebounder on both ends of the court.

Although he doesn’t have great athleticism, he’s got good instincts on D and changes a lot of shots with his great size/length.

Has decent hands and shows flashes of scoring ability in the low post. Has the potential to be an efficient mid range shooter. Can he develop his post game enough so that he demands a double team? That would certainly boost his value.

Weaknesses
dos Anjos is not a particularly fast player in the open court and takes a while to change ends. He lacks the foot speed needed to guard outside of the paint.

Very raw and unpolished and still getting a feel for the game. Has a long way to go before being NBA ready. His offensive game outside the paint is a work in progress.

Doesn’t have a great second jump and can be a little bit slow to get off the floor.

Projection: late first to mid second round pick in the 2018 or 2019 NBA Draft