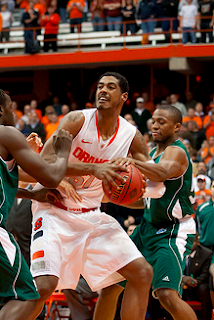 Melo showed great improvement in his second season for the Orange but his season ended early, when he was declared ineligible prior to the NCAA Tournament.

Has unique size that you can’t teach. Worked hard to get into better shape and is now a much more fluid, athletic and in-shape player. Excellent shot blocker who can play way above the rim. Could become one of the better shot blockers in the NBA in a few years. Good rebounder who averaged nearly 6 boards in only 25 minutes per game.

Needs to be more assertive and aggressive on the court. Foul prone and needs to learn the finer points of the game, especially becoming a more fundamentally sound defender.

Limited on the offensive end of the court and is not likely to be much of scorer at the next level. Not the most mature player and if he doesn’t put in the work he could be a major bust.

Projection: late lottery to mid first round pick in the 2012 NBA Draft.