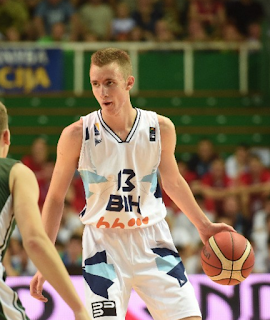 Musa is an offensive talent who can score from three levels. The high scoring forward is a likely first round pick and potential lottery pick but has somewhat limited upside due to his lack of length and lack of big time athleticism.

Strengths
Smooth three point shot. Can get his shot off the dribble and is also an excellent catch and shoot player. He’s a real sniper from downtown.
Has tight handles and is able to dribble through traffic and keep the ball low to the ground. Impressive for a 6-9 player.
Has good open court speed. Might not be a highlight reel dunker but he’s got plenty of athleticism and can really get out on the break.
Uses ball fakes well to move the defense. Seems to always be one step ahead of the defense and keeping them off balance.
Shows an impressive ability to score off the bounce and is able to drive with either hand. Has some blow-by speed.
Anticipates the play well, whether it’s reading the passing lanes or anticipating the rebound. Seems to always be in the right place at the right time.

Weaknesses
He’s got below average length for height. Has good but not great athleticism.
His lack of length limits his defensive ability and his ability to compete for rebounds.
He’s not much of a back to the basket player and doesn’t mix it up in the lane.

Projection: mid first round pick in the 2018 NBA Draft