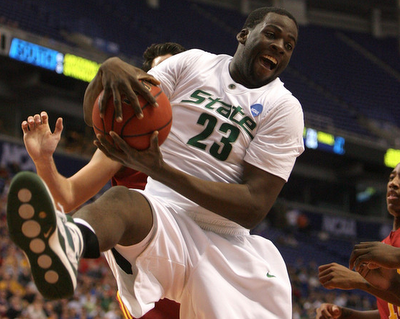 “The Dancing Bear” is a versatile player and a true leader on the court. Has developed his game and his body to the point where he could be first round pick.

Green can do a little bit of everything on the court. Very good rebounder who gets in great position to grab boards. Very good passer who really understands how to play within the flow of the offense and make the smart play. Also gets in great position on defense and plays very sound team defense. Outstanding leader who is like a coach on the floor. Very vocal leader who rallies his teammates and brings great attitude and energy. Has great strength and can bang inside and defend taller players.  Has a good dribble and the skills to play a little bit of point and initiate the offense.

Doesn’t have great height or leaping ability and will not be able to overpower opponents as much at the next level. Doesn’t do any one thing exceptionally well. Although he’s improved a lot as a shooter he is not yet a consistent threat from outside.

Lacks top end speed and might struggle to guard quicker small forwards in the NBA. A below the rim player with average athleticism.

Projection: late first round to early second round pick in the 2012 NBA Draft.