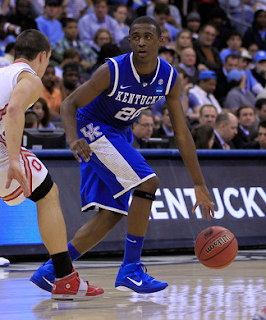 6,4 – Shooting Guard – Kentucky
Doron Lamb is a high level shooting guard prospect who has quickly matured into a leader on the young Kentucky team.  In his sophomore season he is an elder statsman on a team loaded with talented freshman.

He has become a lethal three point shooter and has improved his dribble drive tremendously over the past year.  Nice looking form on his jump shot and hits at a high rate. Not a high riser or power dunker but can score a bit in the lane and keeps defenses honest by taking it off the bounce.  Does not project as an elite shooting guard but could be an NBA starter if he continues to improve.

Not an exceptional athlete and is a bit smaller than the prototype NBA 2 guard. Will have to get stronger to guard big guards and hold his own at the next level. Disappears too often and needs to become more consistent, night in and night out.

Projection: First round pick in the 2012 NBA Mock Draft