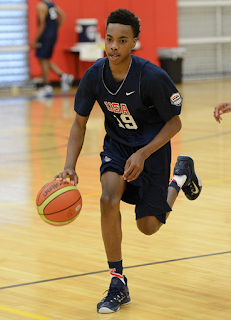 Overview
Garland left the draft combine, most likely because he got a promise from a team in the lottery. It’s looking almost certain that he gets drafted in the 4-8 range with some buzz in the top 3.

Strengths
Garland does a great job of drawing the defense and is a master of using the dribble to create passing angles. He sees the play before it happens and passes teammates open. Has nice pass-ahead ability in transition.

Garland is a creative scorer who is adept at using either hand around the rim. He has a good feel for creating space in the lane to score over taller defenders. Has a soft floater and knows when to use it. Pushes the ball well and can take it coast to coast for the score. Catches the defense off guard with his open court speed.

Has a silkly smooth jumper with a beautiful release. Does a good job of using the dribble to shake free for jumpers and can shoot it with range. Has the type of scoring ability and range that is highly coveted in the modern NBA game.

Garland has quick hands and is a pesky defender who isn’t afraid to mix it up.

Plays a refreshing brand of basketball, as a team first player.

Weaknesses
Very thin and light and will likely struggle to put on weight. Will have a tough time matching up against NBA size and guarding NBA PGs.

Isn’t much of an above the rim player and isn’t the most explosive athlete.

Comparisons
A bigger Jeff Teague
Has some shades of Dame