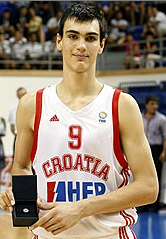 Pros
UPDATE 6/23/14: with reports that Saric will stay in Europe for 2 more years his draft stock will take a hit. He should still be a mid first round pick but maybe not lottery.

Has a unique combination of size and skill. At 6,10 Saric has the skills of a guard including great court vision and passing ability. Has a consistent shot with range out to three point land and a high release point. Plays with great awareness and has an advanced understanding of the game.

Can score in a variety of ways and shows nice post moves and ability to score in the lane. Not the quickest player off the dribble but uses fakes well to gain an advantage and can surprise with his moves to the rim.

Joins a long list of up and coming Croatian players that should make their mark in the NBA in the coming years.

Not a very fast or athletic player. Lacks the foot-speed to keep up with NBA wings and lacks the power to guard in the lane.

Projection: Lottery to mid first round pick in the 2014 NBA Draft