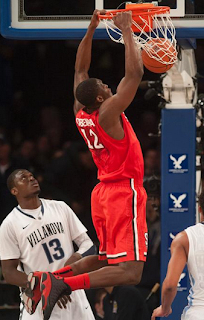 A rare shot blocker who owns the lane but lacks any semblance of an offensive game.

Pros
One of the better shot blockers to come along in years. Even at 6-9, he controls the lane and is a difference maker on defense.

Gets off the group exceptionally quickly and has great timing. Is well built with solid strength.

Good on help defense and cleans up after a lot of defensive mistakes.

Cons
Rarely hits from the foul line and is a liability at the end of games. Think “hack an Obekpa”.  Lacks an outside shot and doesn’t score in the post.

Has bricks for hands and struggles to control the ball.

Projection: mid first to mid second round pick in the 2016 NBA Draft