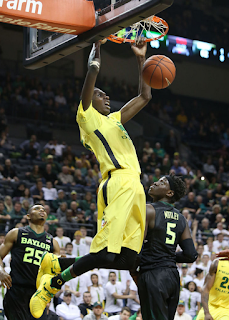 A long, lean and athletic shot blocker who can step out and hit the three.

Pros
Has a very unique combination of length and shooting ability. Can block shots and hit threes, which gives him a lot of value in the modern NBA.

Has a huge wingspan and is a quick leaper, allowing him to block a lot of shots.

Changes ends really well and is a fluid athlete.

Cons
Very skinny and frail and might never develop enough strength to hold his own at the NBA level.

Floats around the perimeter too much and doesn’t have a defined role at the next level.

Comparisons
JaJuan Johnson, but with a little more bounce.

Projection: second round pick in the 2017 NBA Draft