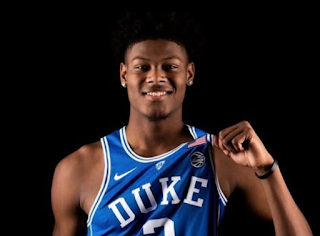 Overview
A big SG with lots of versatility and intriguing upside. Can play on or off the ball and has an advanced offensive game but struggled with efficiency during his time at Duke. Should get drafted in the lottery based on talent alone but will have to show it during the pre-draft process.

Strengths
Has great size for a SG and tremendous length with a +6 wingspan. He’s a well built and strong athlete who has good coordination and excellent burst.

Can be effective in iso situations and knows how to get his own shot (just needs to hit it!). Has a nice feel for getting to the rim and uses crossovers and hesitation dribbles well. Can rise up over defenders to get his shot and does a nice job of creating space off the dribble.

Reddish is a versatile defender who can hold his own at multiple positions, including being able to stay with most point guards thanks to his length and quick feet. He fits the mold of a modern NBA wing who is interchangeable at the 1-3 positions.

Weaknesses
Needs to tighten up the mechanics on his jumper and continue to become a consistent threat from outside. Shot poorly from mid range and from 3 this year and it remains to be seen if that shot will translate/improve.

Isn’t the most explosive athlete and lacks top-end burst and leaping ability. Can play above the rim but doesn’t hang out there.

Seems too passive on the court. Needs to play with more fire and intensity and impose his will on the game.

Comparisons
Reminds of Joe Johnson but is further along in his development at this stage.
Has a little Penny Hardaway in his game (but not as creative).