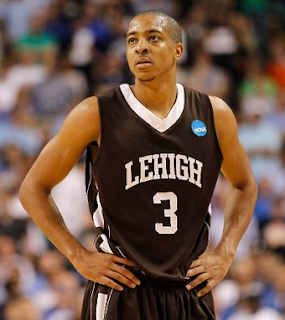 6,2 – Point Guard – Lehigh
Pros
Highly skilled lead guard with a tremendous feel for the game, good leadership skills and a sweet shooting stroke. Can really fill it up, despite seeing double teams and always being the focus of the opposing defense (that’s life as a small school prospect). Terrific free throw shooter and gets to the line often.
Very good rebounder for a point guard, pulling down an average of about 7 boards a game. Crafty defender who reads the passing lanes well and has very active hands.
Cons
Not a high percentage shooter from the field and sometimes forces the issue. Not an elite level passer and will have to get better at getting into the lane, drawing the defense and finding teammates. Good but not great athlete who relies on smarts, not speed. Has faced a low level of competition and will have to make a major adjustment to the speed, strength and size in the NBA.
Projection: mid to late first round pick in the 2013 NBA Draft
by NBA Draft Room