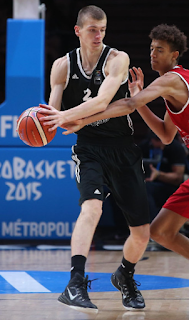 A big, strong and nimble PF who can really play above the rim and is loaded with upside thanks to his superior athleticism.

Pros
Simanic has an NBA ready body to go along with an ever-improving skill set. He is big, strong and quick and shows good versatility on the court. He can explode above the rim and finish with some nasty dunks and he can also step out and hit the outside shot.

Has excellent mobility and is very fluid in transition. Displays some SF skills and has good ball handling skills for a young big man. Can bring the ball up the court and shows a nice ability to beat defenders with the dribble, using spin moves and an impressive first step. Has a lot of bounce and gets off the floor quickly. Can play with his head at the rim.

A solid rebounder and interior defender, Simanic has the type of frame that can hold up against the rigors of the NBA. He should have no problem defending NBA PFs once he fills out his frame with muscle. Does a good job of fighting for position on rebounds and is fundamentally sound with boxing out. Has enough foot-speed and lateral quickness to guard smaller players on the perimeter.

Has excellent shooting form with a really smooth flip of the wrist. Should develop into a high level three point shooter and is a solid free throw shooter.

Needs to continue to develop his outside shot and get more consistent from three.

Comparisons
Has a little Andrei Kirilenko in his game.

Projection: possible second round pick in the 2019 NBA Draft