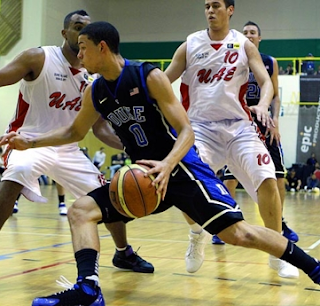 Austin Rivers is a 2 guard with a lot of bounce and energy on the court. He comes from good basketball bloodlines and knows the game inside out. It would have been nice to see him stay for more than a year at Duke but he’s announced his intention to turn pro.

Deadly accurate three point shooter with a high release on his jumper. A good all around scorer who has enough quickness to get by the defender, enough hops to get to the rim and a very good mid range game. Won’t be confused with Kobe Bryant anytime soon but is a good dunker who has excellent jumping ability.

Thanks to his great understanding of the game he makes all the right plays and rarely gets carried away with bad passes or rushed shots. Understands the flow of the offense and gets his shots in rhythm. Also gets good position on defense and anticipates well.

Although he is a good athlete he lacks elite quickness and explosiveness. If this was a track meet he might not finish first but as a basketball player he has all the tools to succeed at the next level. A quicker release on his jumper would help and that is something he will likely develop over the next few years.

Doesn’t have ideal size and will be overmatched against a lot of NBA 2 guards. Will have to become an elite three point shooter to make his mark in the league.