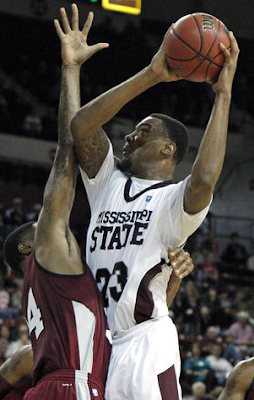 After an up-and-down career Moultrie is playing at a very high level in this, his Junior year. Shows flashes of being a legit NBA power forward and potential lottery pick.

Very quick leaper with great length and body control. Plays above the rim and mixes it up inside, grabbing boards and throwing his weight around. Runs the floor well and is a threat on the fast break.

Has good hands; catches the ball well and shows good form on his jumper. Can step out to about 18 feet and knock down shots. Uses his size well to score over opponents in the lane, with a developing jump hook and drop-step move. Has shown good leadership on a mostly immature Miss. State team (anyone who can play on the same frontline as Renardo Sidney must be a saint).

Shoots a high percentage from the floor and the charity stripe. Even knocks down some threes and projects as a “stretch 4” in the NBA.

Has been inconsistent throughout his career and needs to come to play every game, all season long. Not a great shot blocker and needs to put in more work on the defensive end of the floor. Needs to add weight/muscle.

Projection: Late lottery to mid first round pick in the 2012 NBA Draft.