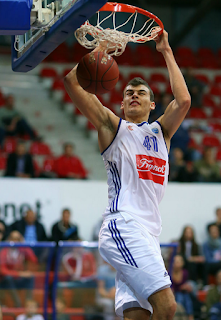 Long and athletic post player with a solid all around game.

Pros
Has really good coordination, quick movements and a nice scoring touch. Has the length to compete in the paint and the speed to get out in transition.

Has really good hands, catches the ball well and as a soft touch around the rim. Excels in the pick and role, especially diving into the lane.

Does all the dirty work well and doesn’t need the ball in his hands to impact the game. Sets screens, rebounds, defends and runs the floor well. Solid post defender who also shows good awareness on help defense. Has the length to protect the rim and alter shots.

Does a nice job of establishing position in the post and is developing some nice post moves. Projects as a nice back to the basket threat at the next level.

Cons
Is not the strongest player and has a ways to go to be able to hold his own against NBA centers.

Will have to develop his perimeter defense, defending the pick and roll and guarding the modern stretch four players.

His mid range and outside shot are a work in progress.

Comparisons
Reminds of a taller David Lee, with his scoring ability and fluid athleticism, but he’s already a better rim protector than Lee.

Projection: Looks like a really solid role player at the NBA level. Should be drafted mid first to mid second round in the 2016 NBA Draft