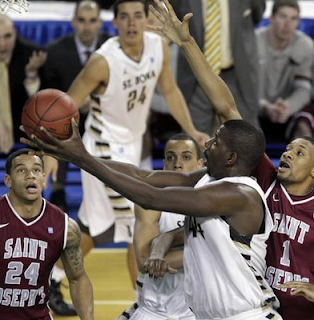 Versatile Senior forward who can bang inside or drift out and knock down threes. The Canadian is rising up draft boards and could move into the first round in the 2012 Draft.

Can do a little bit of everything on the floor. Grabs about 8.5 boards a game, blocks a lot of shots and has also become a very effective outside shooter. Scores very efficiently, hitting 57% of his shots from the field. Hits nearly 80% from the foul line and draws a lot of fouls.

Very good athlete with enough quickness to defend on the perimeter and get up and down the court like a wing. Very good interior defender with good hands and very good understanding of the game. Makes the right play and doesn’t force the issue.

Not a true small forward or power forward and will have to continue to develop his perimeter game to excel in the NBA. Too many turnovers.

Projection: late first to early second round pick in the 2012 NBA Draft