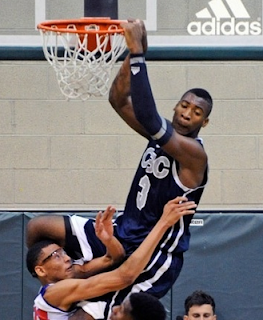 Drummond is the type of physical specimen that comes along about once a decade. He combines great size, brute strength and explosive athleticism in one package and will likely follow in Dwight Howard’s footsteps as the next great NBA big man. During his one year at UConn we can expect to see him dominate the Big East and give the Huskies a shot at another national championship.

Huge, strong and explosive. Very skilled around the basket and shows true back to the basket post moves. Great leaper and dunker who drawls fouls well and finishes around the rim. Gets up and down the court well for a center and has decent hands and handle for a big man.

Very good shot blocker, especially as a help defender and has learned to use his size well and is getting better at avoiding fouls.  Has the potential to be an elite rebounder due to his physical tools but needs to box out more consistently and show better hustle.  Can dominate on the defensive end of the floor when he puts his mind to it.

Seems to have a good understanding of the game and usually makes the right play with the ball.  Gets into position well and is a more than capable passer.

Like many young big men he needs to improve his free throw shooting.  Sometimes gets out of control with spin moves and tries to do too much with the ball.  Needs to show consistent hustle and a better motor.  Sometimes floats around the perimeter too much and needs to stay in the lane and become a true center rather than try to be a forward.