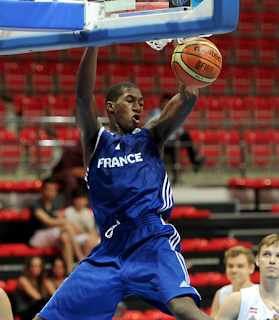 A physical specimen who is still becoming a basketball player. Has a lot of tools to work with.

Pros
Big, strong and quick PF with good length and unique athletic ability. Gets off the ground well and is a ferocious dunker.

Can defend above the rim and is becoming a solid post defender. Projects as a solid rebounder.

Cons
Is not an advanced offensive player and will have to improve his ball skills to flourish at the NBA level.  Needs to polish his post moves.

Doesn’t have great hands. Is very raw, doesn’t have a great understanding of the game and could take a few years to contribute.

Comparisons
Is built like Antonio McDyess and has a similar skill set.