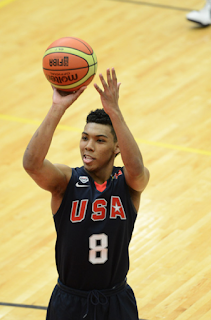 A pure scorer with really good quickness and a nose for the bucket.

Strengths
An aggressive scorer who puts a ton of pressure on the D. Is always looking to get into the lane and get his shot. Has a quick first step and overall good athleticism. Has an advanced array of moves to get his shot off including a nice turn around J and a knack for creating space with the dribble. Has a pro level mid range game.

Has really good body control and excellent leaping ability. Attacks the rim with a vengeance and is always a threat to take it into the lane and dunk.

Has the athleticism and the mentality to be a good defender and has shown a lot of improvement on the defensive end. Is becoming a good on the ball defender and has an improved understanding of team defense.

Weaknesses
He’s a natural scorer but not necessarily a pure shooter and there are some questions about his three point shooting ability.

He can get overzealous with driving the ball and tends to force the issue.

Comparisons
Reminds of a stronger Courtney Lee or Rodney Stuckey

Projection: late first to early second round pick in the 2018 or 2019 NBA Draft