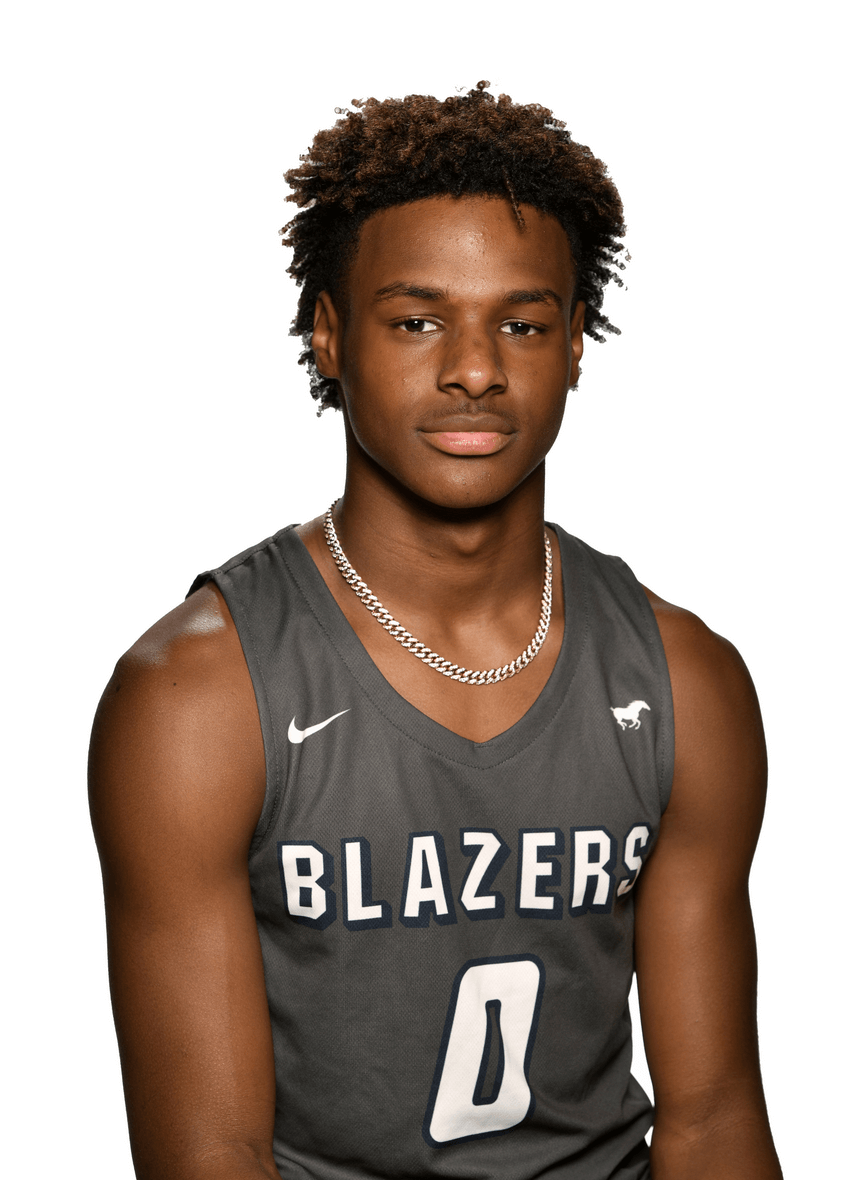 There are two sides to the story when evaluating LeBron James Jr. (Bronny).

On the one hand it’s important to erase the famous name from your mind and just watch his game and evaluate him like any other prospect.

Now, thinking that just any team in the league will get King James is naïve. The reality is that teams and agents will maneuver to make deals behind the scenes to bring the James family to town. The Timberwolves aren’t getting LeBron and Bronny. That’s clear.

If I had to guess I’d say that the Lakers will draft Bronny and keep the King happy for another year or two – and work that hype for every dollar they can. The Lakers don’t have their 2024 first rounder (traded to Pelicans) so might have to maneuver to make it happen. But where there’s a will there’s a way.

How Good Is Bronny James?

Putting all of the other intrigue aside let’s take a look at Bronny as a prospect in his own right; he’s a high level prospect who deserves to be seen in his own light.

Bronny is a thick and strong 6-3 combo guard with elite bounce. He’s not the biggest guard out there but he’s a mean and menacing dunker who gets off the floor with ease. He’s got good length (although no official wingspan measurement) and certainly has all the physical tools to play in the NBA.

Besides the great bounce Bronny is a complete player, a leader on the floor and a guy who makes his teammates better. He’s not the highest scoring guard you’ll ever see and his stats might underwhelm you some games but he’s the type of all around talent that helps you win. Don’t get fooled by the stats; Bronny is really, really good.

Many recruiting services have him as a 4-star prospect but in my eyes he’s right on the verge of earning that 5th star. He’s not a top 10 player in the 2023 recruiting class but he’s safely in the top 30 and there’s any easy argument to be made that he should be top 20.

Bronny’s All Around Offense

Bronny is a true combo guard on offense. He’s a very capable play-maker and good penetrator who can collapse a defense. And he’s equally comfortable taking it all the way to the rim or dishing to an open teammate. He tends to make the right play and takes what the defense gives him.

He still has a ways to go with developing his ball-handling and overall lead guard skills. This could be his biggest area of growth and give him a chance to be a special NBA player, if he can hone his point guard skills and become a true 1. At this point he’s more of a glue guy/connector who makes all the right plays and gets his within the flow of the offense.

Bronny is also a very solid outside shooter with a pure release on his jumper. He’s not a score-first or pass-first player – he’s just a ball player who knows how to play the game. His solid shooting mechanics combined with his work ethic and high-level training lead me to believe he’ll become a knockdown NBA 3pt shooter in time. And he already has NBA range, showing an effortless release from deep.

We tend to like players with a crystal clear role but the reality is that the NBA is all about versatile players who can step into multiple roles and play within team concepts. Bronny has that versatility.

Bronny is a bulldog on the defensive end, giving great effort, showing off his understanding of the game and using his size/strength and quick hands to shut down ball-handlers. He’ll mainly guard 1’s and 2’s but has the strength to guard on the wing when necessary.

Off the ball Bronny shows high-level awareness and plays with great positioning. He reads passing lanes well and knows when to bring a double team. His instincts are elite and he seems to know where the pass is going before it’s thrown, allowing him to jump the lane and get the steal or deflection.

My favorite aspect of Bronny’s game is that he competes at a really high level. He might be the young prince but it never looks like he expects things to be handed to him. He’s on a mission to become his own player and make his own way in the game.

His defensive intensity sets the tone for his team and he rarely takes a play off. His heart and hustle combined with his physical abilities will bring him success at any level of play.

Bronny also has a seriously advanced understanding of the game, which makes a lot of sense given his pedigree. And his ego seems to be fully in check. He doesn’t force the issue or try to go get his. He plays within the flow of the game, makes good reads, shares the ball and supports his teammates through thick and thin. It’s truly impressive to see his humility on the court, given his talents, fame and incoming fortune.

While there’s never a direct one to one comparison it can be helpful (but mostly just fun) to compare prospects to current or past NBA players. Here are a few for Bronny:

Avery Bradley – Avery was never an elite NBA player but he was a 5-star prospect, one of the best guards in his class and a player who always gave great effort on both ends of the court. His NBA role was mainly as a defender, connector and occasional primary ball handler and that could be the role that Bronny plays, especially early in his career. I think Bronny’s ultimate upside is more than Avery Bradley but that would be a good baseline to start at.

Robert Pack – This one doesn’t do justice to Bronny’s upside but I often get glimpses of Robert Pack when watching Bronny play. Pack was a compact, thick, strong and bouncy guard who was a bit undersized but a tough, hard-nosed defender and competitor (old heads will remember).

George Hill – Not a one to one comparison but I could see Bronny having a George Hill-type of impact in the league as a solid piece on a contending team who does whatever is needed to help the team win. Bronny is thicker and more explosive than hill and probably has more upside.

Marcus Smart – Comparing Bronny to an All-NBA level defender might be generous but they are built the same way, both are tough and feisty on defense and have the ability to play on or off the ball on offense. Bronny is more bouncy than Smart and projects as a better 3pt shooter but probably won’t ever get to the same level on defense.

LeBron has stated that he’ll go play for the team that drafts Bronny. The King shows no signs of slowing down (ok, maybe just a little) so the promise of getting the best player in history if you draft his talented son is a pretty good deal.

With that said it won’t be just any team that gets Bronny and the King. As I mentioned at the top of this article there will be backroom dealings with agents and teams to decide where the James family plays. My money would be on LA.

This is the multi-million dollar question. Literally. Whichever program lands Bronny will have all sorts of financial benefits coming there way both next year and far into the future.

At this point the leading contenders are Ohio State, Oregon and USC.

Ohio State is his home state team (Bronny was born in Cleveland and spent his early years there). LeBron Sr. is a very vocal supporter of Ohio State sports and Bronny seems to be a fan as well. He visited the school in September and seems to really like the program. At this point I’d put Ohio State as the narrow front-runner for Bronny.

Oregon is very much in the running as well. There’s the Nike connection plus some close relationships there. Bronny would bring a whole new level of buzz (or quack) to the Ducks and the NIL money would be big.

USC is the third and (presumably) final school that has a chance to land Bronny James. The Trojans are in his current hometown of LA and would allow him to play in front of his family and in a major media market. Bronny next to Isaiah Collier next year would be nice.

There’s still a chance another program or professional option emerges but these 3 seem to be the favorites. Where probably about 3 months away from seeing where Bronny will take his talents.

My honest eval of Bronny is that he should be considered more of a borderline first round prospect who, under normal circumstances, would have to spend a few years in college developing his lead guard skills to have a chance to lock in a first round grade. But with the LeBron James promise in place and the famous name he could be drafted much sooner than expected.

If the Lakers want to keep LeBron they will have to consider trading for a first round pick next year to select Bronny.

Born in October of 2004, Bronny would have been eligible for the 2023 draft had he graduated from high school last year. But as it stands it looks like he’ll play one year in college before entering the 2024 draft.

Bryce James Is Next

Bronny isn’t the only heir to the throne. His younger brother Bryce is a high level prospect as well who should have a chance to be just as good as his older brother. Bryce is a bigger, longer player who is still growing into his frame. Just a high school sophomore Bryce is pushing 6-6 and growing. He projects as a likely 4-star prospect down the line and will surely get just as much hype and attention as his brother.