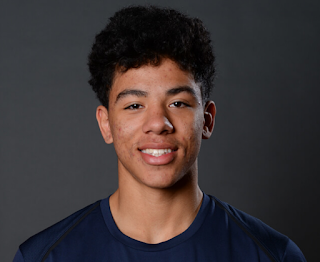 DJ Carton is a warrior on the court. He has a complete offensive game that has a combination of strong, physical and smooth play. He is a 5-star point guard who committed to Ohio State in July. He’s got the personality and confidence to be a potential face of the Buckeye program.

Carton is 6-1, 190 with a 6-6 wingspan and plays for Bettendorf high school in Bettendorf, Iowa. Carton is ranked a 5-star player by Rivals, ESPN and 247 sports and they all are correct; this dude is the real deal. He is ranked the #1 prospect in Iowa, #2 point guard in the nation, and #24 ranked prospect in the 2019 class by 247 sports. Carton was also ranked #27 by rivals and #24 by ESPN; I had a talk with him about his commitment for 5-star Corner.

LJ: What made you commit to Ohio State?
DJ: The coaching staff and how comfortable I am with this group of guys. They are all my brothers already and I haven’t even played with them yet it just goes deeper than basketball and that’s special to me.

LJ: Have you gained a relationship with the recent 2018 Ohio state commits and 2019 commit Alonzo Gaffney?
DJ: Yeah all the 2018 commits I’ve been really close with and with Lonzo I’ve talked to him a lot as well, definitely going to be a brother of mine for a long time, he’s got the same mentality as me and we just click together. I also think we have a good chance of picking one more of my brothers up. I think it has to do a lot with coaches.

LJ: What do you like about Coach Holtman?
DJ: Coach Holtman is creating a great culture that people want to be a part of. He is a special coach who cares for his players.

LJ: What do Ohio State coaches like about you? What have they said about your future with the program?
DJ: They think that I am a national type prospect and that I have a chance to be a great college basketball player. They think I have a good future in store and that I can play the game of basketball for many years.

LJ: What will the country see from you this upcoming high school season?
DJ: They will see a much different player from this summer. I have gotten stronger and become a much better shooter I believe they will see a player who will put up good numbers all-around with a Russell Westbrook type play style.

LJ: What has improved about your game the most?
DJ Most definitely my shooting has improved the most. I have been working on it a lot and just doing different combo moves into a jumper have gained much progress.